“Your only resource is human,” it reads at the top of our homepage. This line is a tribute to—as well as a gentle reminder of—the living, breathing people that make every workforce a force. It highlights not just the power of their commitment, but the reality of their vulnerable humanness. Recognition of (and empathy for) this from leaders naturally brings with it an understanding of the importance of ensuring employees are supported—not just on the level of their physical and mental health, but in terms of their overall vitality.

Vitality is defined as “the capacity to live and develop”, as well as—in a definition from positive psychology—“Approaching life with excitement and energy; not doing things halfway or half-heartedly; living life as an adventure; feeling alive and activated”.

Creativity goes hand in hand with vitality—simultaneously nurturing it and sustained by it. As an essential skill for most professionals in today’s knowledge economy, creativity is indispensable for coping “with unexpected changes” and building “the best pathways forward”—it’s also, together with intuition, curiosity, and imagination, one of the core human traits most difficult for AI to replicate.

The task of supporting employees’ bodies, vitality, and creativity in today’s work world is no easy one, however. It goes against the still-dominant paradigm in the Western world to, “treat our work as an extreme sport, where our struggles and sacrifices in the name of our job are glorified.”

This “I work, work, work and I don’t sleep” approach appeared to be shifting back in 1999 when an article in the Wall Street Journal celebrated the rising trend for entrepreneurs to get a full eight hours of sleep, noting: “Once derided as a wimpish failing […] slumber is now being touted as the restorative companion to the creative executive mind.”  In the same piece, with impressive prescience, one CEO warned:

“Technological change […] has made the 24-hour workday possible. It is very important that the work culture of the future includes the ability to not work for a certain number of hours per day, or we are all going to burn out.”

Eight years after the Wall Street Journal piece appeared, CEO Ariana Huffington woke up in a pool of her own blood after having passed out from exhaustion while checking her emails—breaking her cheekbone on her fall. Despite the warnings, “vintage workaholism” as the Wall Street Journal article called it, hadn’t died out at all.

In 2017, Huffington published her New York Times bestselling pro-sleep manifesto, The Sleep Revolution: Transforming Your Life, One Night at a Time”. The same year, think-thank, RAND corporation, concluded that insufficient sleep was a ‘public health problem’ costing the global economy billions in lost productivity each year.

A year later, the US Centers for Disease Control and Prevention (CDC) labeled sleep disorders a public health concern, while the WHO simultaneously warned of a 21st century “sleep loss” epidemic, publishing statistics that revealed that up to 45 percent of the population worldwide wasn’t getting enough sleep.

The hidden costs of sleepless nights

Scientists have determined that: “Bad sleep weakens the immune system, impairs learning and memory, contributes to depression and other mood and mental disorders, as well as obesity, diabetes, cancer, dementia, and an early death.” Simultaneously, not getting enough sleep has been shown to eat away at the skills we need most to thrive in the workplace with risks including “decreased productivity, reduced efficiency, more errors and more accidents”.

In developed nations, two thirds of adults purportedly do not get the recommended seven to nine hours of sleep a night, while sleep-related absences from work are thought to account for the loss of ten million working hours a year in the United States, 4.8 million in Japan, and 1.7 million in Germany.

Companies everywhere are increasingly battling “presenteeism”: exhausted employees who drag themselves to work, yet barely manage to function. It all adds up to an enormous economic cost, estimated “in the range of $680 billion a year in five OECD countries—for example, $400 billion for the United States and $60 billion for Germany”.

Some of this cost can naturally also be attributed to the loss of creative and innovative thinking that comes with sleep deprivation. Numerous experiments have confirmed the correlation between sleep and creative problem-solving. A scientist who successfully identified one facet of this connection advised in an article in The Atlantic: “if you’re working on a difficult problem, allow yourself enough nights of sleep, […] particularly if you’re trying to work on something that requires thinking outside the box”.

Yet today we’re still exhausted and burning out. One view on the root of the issue is put forth by strategist, digital anthropologist, and author Rahaf Harfoush, in her 2019 book “Hustle and Float”:

“As we struggle to keep up in a knowledge economy that never sleeps, we arm ourselves with life hacks, to-do lists, and an inbox-zero mentality, grasping at anything that will help us work faster, push harder, and produce more […] the endless hustle is ruining our mental and physical health while subtracting from our creative performance. Productivity and Creativity are not compatible.”

Developed by mental health experts, the nilo.programs “Sleep More Restfully” and “Nurture your Creativity” address these two central—and symbiotic—pillars of physical health and vitality in depth, going far beyond superficial stopgaps like lunch-time coloring books and generic apps to deliver science-based solutions and techniques that stand the test of time and can be drawn on again and again for support and inspiration.

Each program lays out the theory behind each topic then gradually zooms in to put theory into practice. Different learning formats keep things fresh and allow users to take screen breaks—for example by listening to audio material while exercising or on their commute. A range of thought-provoking exercises offer opportunities for self-reflection and promote deep-dives into these core topics.

More than just a valuable resource in the knowledge economy, thinking divergently “creates unconventional, courageous, and innovative ideas […] we are more successful the more often we leave our comfort zone, the more often we think outside of existing norms and limitations”.  But how can we sustainably tap into this desirable state?

The theory segment of “Nurture Your Creativity” tells us: “How strong our relation to creative thinking is has to do with our capacity to turn inwards to our unconscious self. The depth of our learned ability to play, and the courage to allow ourselves to be unsettled are also decisive factors.”

You might well ask yourself what exercises can support and coach such “messy” and “unstructured” thinking processes and behaviors—especially given the diversity of nilo.program users. In “Nurture your Creativity”, a guided journey to an imaginary landscape that activates all the senses, a spatial puzzle that challenges logical thought processes, a writing exercise that yields random word associations, and a string of instructions that provoke users to move their bodies in goofy ways are some of the quirky, surprising, and fun ways by which everyone—even more left-brained listeners—are gently seduced into exploring their creative minds.

nilo “tools”—ranging between 2- and 20-minutes in length—give the users further opportunities to practice and integrate the concepts learned in the programs. These mini sessions take the form of guided audio exercises, meditations, and relaxations which help the brain reach the desired state.

“Nurture your Creativity” concludes its series of mind-expanding exercises by coaching users to schedule regular time out in their everyday life to be daydreamers and/or practical jokers; to choose a different route while running routine errands, to laugh more, visualize their own travels to imaginary lands, sing and make music spontaneously.

It’s wacky, it’s wild, it’s been proven to work…and it might just be exactly what we all need to thrive and survive in the 21st century. Certainly what was true on the pages of the Wall Street Journal back in 1999, is just as true today: ““In today’s high-tech, information-driven economy, the fresher, more creative mind often wins the day”.
To learn more about nilo.programs and our 360° workplace mental health platform, book your free demo today! 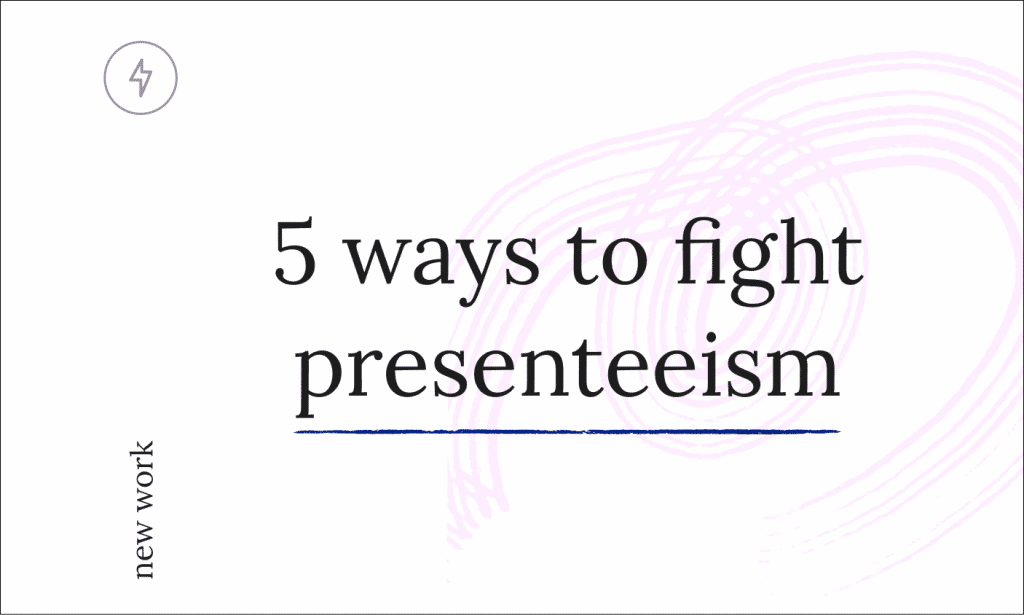 5 ways to “presenteeism-proof” your organization 

As you learned in Part 1 of this article, presenteeism is a complex phenomenon with a diverse range of drivers. It can cut across your... 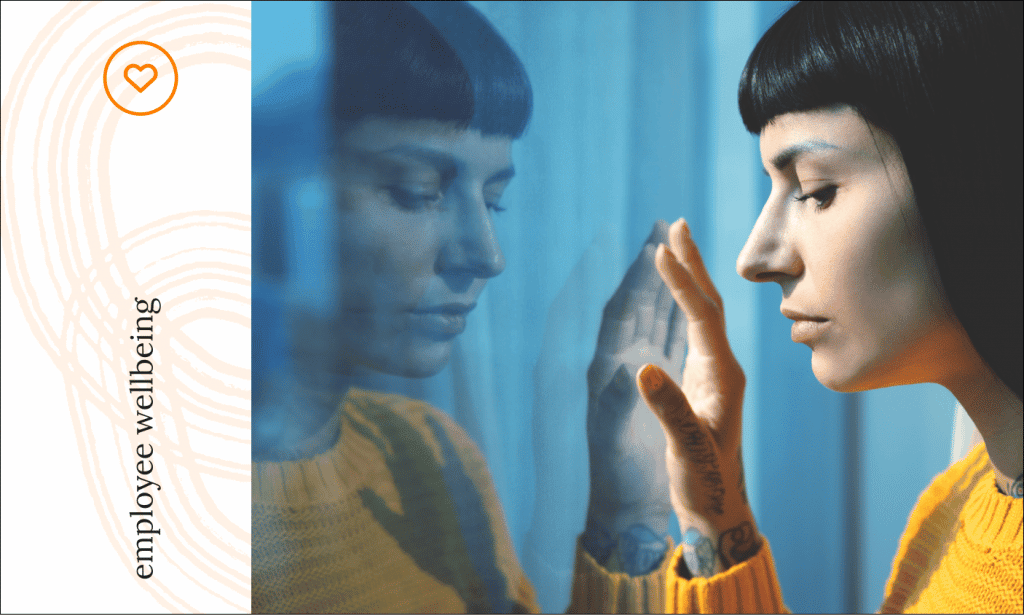 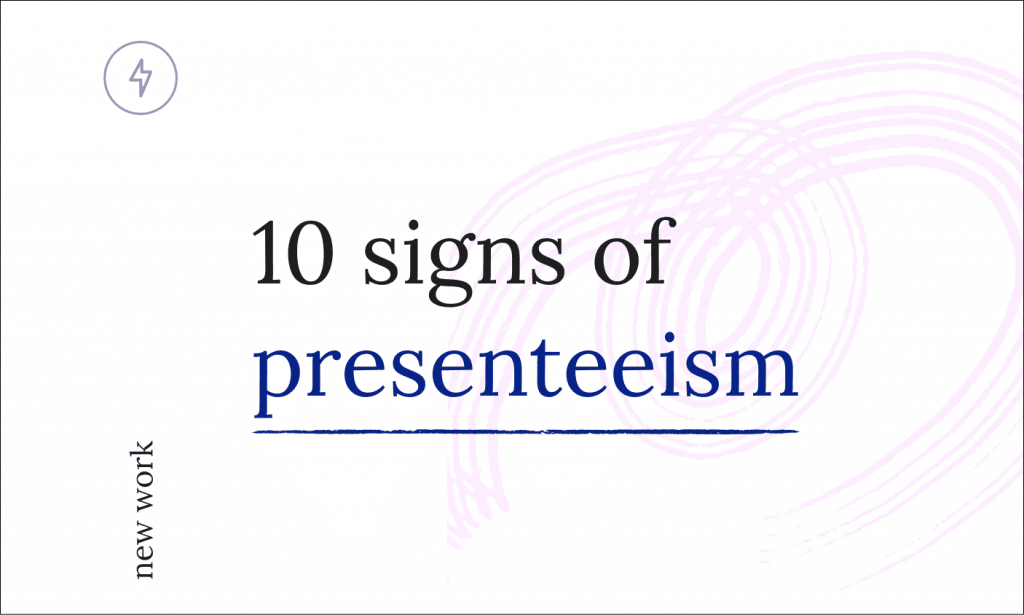 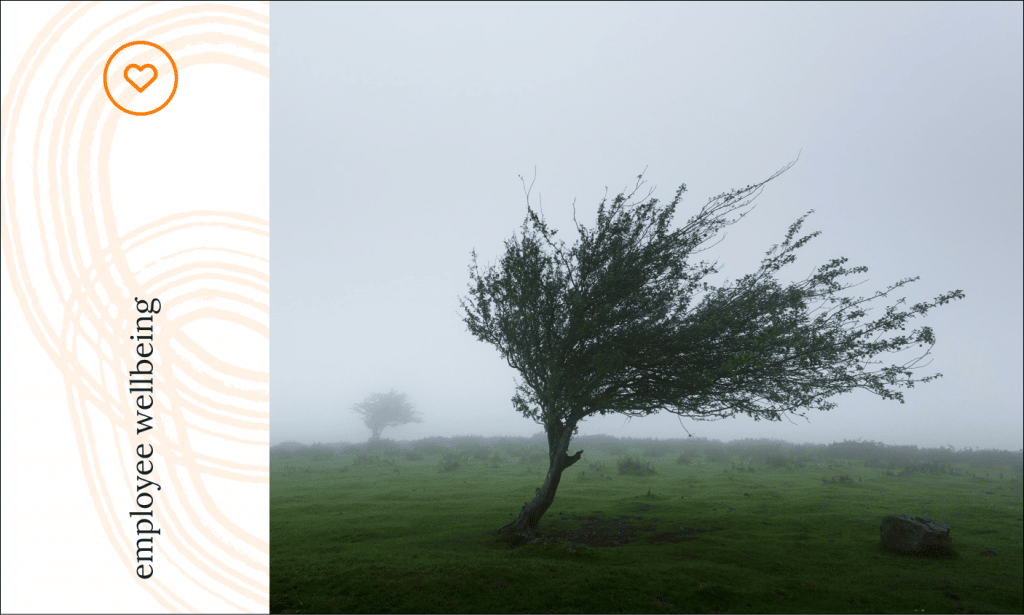